How It All Began: 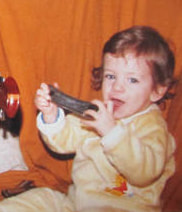 Jesse playing harmonica at 16 months.
Jesse Ferguson was born in Cornwall, Ontario, Canada, and grew up in a musical family. He showed an early interest in music, even singing in his grade-school choir. Every member of his family has played an instrument at some point. Through playing music with his family, Jesse learned that music can be a vital part of everyday life—not something reserved for special occasions or for highly trained elites. Music brings family and friends together for good times and provides a bond between the generations.
In his early teens, Jesse was given a mandolin and enrolled in music lessons, but he soon decided that formal music study wasn’t his path and that learning “by ear” in the folk tradition was the direction he would take. In his late teens, Jesse played music with greater dedication, and began experimenting with songwriting. As with most songwriters, his early attempts bore a strong similarity to works by his influences: The Beatles, James Taylor, Neil Young, Tom Petty and Blue Rodeo, to name a few. 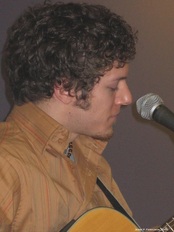 At an Ottawa poetry reading, 2005.
Jesse’s musical horizons broadened when he left home to attend university in Ottawa, Ontario: Canada’s capital city. In residence at the University of Ottawa, he found other young musicians from diverse backgrounds who brought their influences to jam sessions held on Jesse’s supposedly “24-hour quiet” floor. These early college years (beginning 2001) also saw Jesse’s first professional performances in charity benefit concerts, at poetry readings, etc. He was developing a confident, passionate musical style combined with down-to-earth interaction with his audience. He continued to develop his vocal and instrumental abilities throughout his undergraduate years, while deepening his love of traditional folk music. His songwriting went hand-in-hand with his accomplishments in writing poetry, and though Jesse no longer writes poetry for print publications, his work in poetry continues to inspire the lyrics of his original songs. 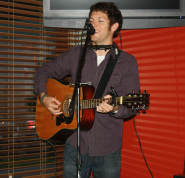 At a Sydney pub, 2011.
Over the past decade, work and studies have taken Jesse first to Fredericton, New Brunswick, then to Sydney, Nova Scotia (Cape Breton), then back to Cornwall where he currently resides. Jesse and his wife also welcomed a son into their lives in 2009. His son, Brennan, occasionally joins in the music these days. Throughout these major life changes, music has remained a constant source of fulfillment in Jesse’s life. He has increased the number and size of the venues where he performs, including major Celtic festivals and Highland Games. At the same time, he has increasingly focused on original songwriting in the folk and classic rock traditions.

Since 2007, he has posted over 300 music videos on his YouTube channel, videos that have now been viewed over 8 million times. He has also released seven solo albums, the most recent being Sailor Songs (2020). He recorded and mastered all of his CDs, and he performed all vocals and instrumentals on them.

Jesse and son carrying on the family tradition, 2020 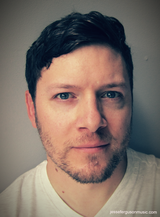 For me, music serves both personal and communal functions. On the personal level it provides therapy and stress relief: it allows me to explore and express my feelings. It also provides challenges that keep me sharp. It’s a comfort and a constant that costs very little compared to its returns.
The social function of music is just as important to me. It allows me to connect to other people: to the other songwriters whose works I perform, to my audience members, to the musicians I jam and perform with, and to past generations whose songs and values get recycled in the ongoing process of musical creation. Even when I write a new song, I’m aware that I’m building on past music and that future generations will take over when we’re gone. That’s a comforting thought, but it also suggests a responsibility to do my best in writing and performing music. Whether or not my songs become famous, I will do my part to promote honest music that reflects the feelings of common people, unlike much corporate-backed music that more often considers sales first.
For all the troubles our world faces, now is an exciting time to be a musician and a music lover. We have so many options, and technology is making it possible for less-commercial music to reach a broader audience. This explosion of choice can be overwhelming, but it’s also liberating. Thanks for joining me on this journey!